QField creates forms similar to, but not equal to QGIS. The field widgets from QGIS are supported on a best effort basis and optimized for the mobile use.

The editable flag of fields is respected.

QField offers a much more fine-grained control over the last used values and ignores the QGIS setting.

The setting suppress attribute form is directly applied to the QField form.

For more information refer to the relations chapter of the official QGIS Documentation.

The relation widget shows all the referencing child features in a list. It is possible to add, delete and open them.

The visual identification of the list entries are done via the Display Expression of the child layer.

Since the parents primary keys are used as foreign keys on the referencing child features, these primary keys must be save to use even after the synchronization back to the original data. Therefore we recommend to use stable values such as UUIDs for primary keys.

It is possible to already add children from a parent that is about to be added. This possibility will be blocked if there is no valid primary key on the parent or the constraints are violated. In case the adding of the parent feature is canceled after some children have been added already, the children are deleted as well.

On many-to-many relationships, according to the cardinality setting in the QGIS Vector Layer Properties, on adding, deleting or opening an entry in the list effects directly the child layer (on direct cardinality) or the linking table (on many-to-one cardinality).

The second case is usually used when there are additional relation information (e.g. percentage) in the linking table.

In case of the many-to-one cardinality on many-to-many relations the Display Expression needs to be set on the linking table.

The widget type Attachment is used with fields that store the path to files.

The path should be set to relative. The pictures, pdf and docs are stored then in a sub-directory of the project, where the link stored in the textfield is pointing to.

On synchronization the sub-directory with the pictures, pdf and docs has to be copied as well.

The option hyperlink on the attachment widget will disable the camera functionality and enable a hyperlink to open a document (pdf, doc, ...). 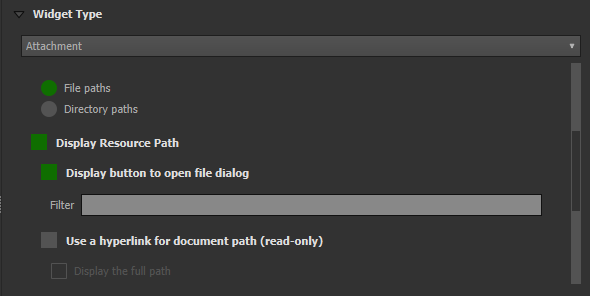 The widget Value Relation offers values from a related table in a combobox. You can select layer, key column and value column. Several options are available to change the standard behaviors: allow null value, order by value and allow multiple selections. The widget will display a drop-down or multiple-select list of the referenced features.

Groups can be hidden based on an expression. This is useful when certain attributes are only required under certain conditions. As an example imagine mapping trees. Some of them might have a disease and you have a list of possible deseases. To not clutter the form with many fields, make a group and configure a visibility expression for a group "diseases". Add a field "desease" with a checkbox. Only when the checkbox is checked, the list of diseases will be available to you.

Attribute fields can have constraints attached. Constraints are expressions that needs to evaluate to True (or 1) in order to be able to save the form. Constraints are configured on a per-field basis and a description can be added that will be shown if a constraint is not satisfied.

You cannot enter an elevation value higher than the highest mountain in this country.

Fields can have default values configured. Default values are inserted into the attribute form when digitizing a new feature. They are visible and can be modified as long as the field is editable. They can be based on the geometry or expression variables.

For more information regarding storing information related to your position in object attributes, refer to the deticated GNSS documentation<gnss_variables>.

If you want to assign a region code based on the location where a new feature is inserted, you can do so by using an aggregate expression:

The "Use completer" checkbox must be checked to be able to use the auto-complete in the value relation.

Here a video showing how it works on QField